I am a biologist with more than thirty years of experience, achieving U.S. Patent in 1992 Anaerobic Digester  followed by U.S. Patent in 2001 Anaerobic Digester System and Method, based upon research, development and commercial operation of digesters which used sustainable multi-specie-biofilms of beneficial bacteria to convert, animal, food and plant biomass into biogas, principally methane and hydrogen) refining the digestate (residues) to create liquid plant tonics, plant foods, and soil amendments, single-cell proteins and metabolites for use in feed rations for aquaculture fish, shrimp, prawns, and poultry.

I experienced a quantum leap in 2012 when I met Bob Rawson, the founder of Bioremediation International Inc. and the creator of IOS-500, a microbial inoculant of three non-gmo and non-pathogenic probiotic bacteria, which Mr. Rawson used to bio-remediate crude-oil-contaminated-soil in the Amazon rain forest.

I used IOS-500 to treat the odor of a liquid digestate from a food-waste-digester in Sebastopol, CA.  But that was just the beginning of this adventure.

IOS-500 worked in such a way that I was able to produce a liquid plant food and inoculant that was useful as a liquid soil amendment. Local growers raved about the 25% increase in branching and budding. The Plant Elixir was proven a success. 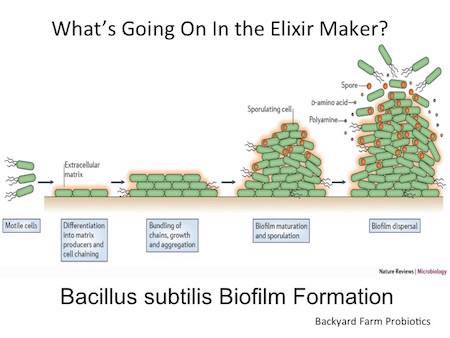 Because the Elixir needs to be aerated and replaced as it is used with clean water, to maintain the integrity of the microbial population, I created the Elixir Maker that is easily maintained at home  to make an Elixir of probiotics as needed for our personal use with our pets and with ourselves as well as making our gardens thrive making healthy soil and growing healthy plants.

These same microbes have been used for 50 years as human probiotics by people throughout Europe and developing countries and now in the US due to the over-use of and dependence upon antibiotics in our meat, eggs and milk supply chain

The active principles of the Elixir are Bacillus licheniformis, Bacillus subtilis and Pseudomonas fluorescens, first as plant growth promoting bacteria in the rhizosphere; and as sustainable probiotics for our pets and ourselves. Individually and together they are extraordinary in their life cycles, and they are especially robust, when organized in multi-specie-biofilm-colonies in the Elixir Maker, treating our plants and trees as their hosts, and when taken by our pets and ourselves, treating us as their hosts and adding a much-needed diversity to our respective guts: microbiomes.

The Elixir protects, promotes and helps plants, shrubs and trees to fight disease and be healthy for the life of the tree. Now, personal testimony and the sharing of anecdotal evidence, supported by science, is showing us that animals (pets) and humans also thrive by using these beneficial microbes to diversify our personal microbiomes and to improve our respective innate immune systems’ ability to fight disease.

The following is excerpted from an article in the scientific journal Frontiers in Cellular Neuroscience (Sept 17, 2013) “Alzheimer’s Disease and the Microbiome”

“The beneficial actions of bacterial-based probiotics are highly inter-related, and are thought to function, in part: (i) to aid in complex carbohydrate fermentation and absorption; (ii) to provide a significant source of a range of essential vitamins, particularly those of the vitamin B and K group; (iii) to compete with pathogenic microorganisms in the GI tract; (iv) to antagonize and neutralize enteric pathogens; (v) to metabolize and neutralize dietary carcinogens; and (vi) to favorably modulate the host’s immune response to resist infection and disease.”

“Besides the potential application of probiotics in the prevention and treatment of various health conditions and diseases such as allergies, GI and urogenital tract infections, inflammatory disease, cystic-fibrosis and certain cancers there is increasing interest of positive microbiome effects toward the CNS (central nervous system).”