How to set up your Elixir Maker

To activate the Elixir, add water that is non­-chlorinated, filtered, bottled, or well water, up to the top ­5­ liter ­mark of the Maker, and replace the fill­-cap. Connect the free end of the plastic tubing to the barb­ fitting on the fill­-cap.

A check-­valve is inserted in the tubing with its arrow pointing in the direction of the air­flow, produced by the air pump that is provided with the Kit. Plug in the air pump to turn it on and adjust the air knob if available, to its maximum output, balancing the flow if you are using a tee-­splitter to operate more than one Maker.

A profuse stream of bubbles should begin to flow, lifting and moving the volume of Elixir from one end of the Maker to the other, flowing downward through the handle past the spigot, when it is full, and back to the opposite end providing a re-circulation loop. Excess air is allowed to exit the Maker from the black plastic stub attached to the fill­-cap.

Aerate the Elixir for 24­36 hours before use, and continue to aerate the elixir on a 24­hour basis. Follow the directions on the second page of instructions provided to you to refill the Maker with water, removing a sufficient volume for your use during the “remaking” period and add a 1⁄4 teaspoon of Elixir Powder for each liter or quart that you replace.

The Elixir Powder of microbes and their food are dry solids that need to be wetted and fully “hydrated” to become soluble, aided by the air bubbles produced by the bubble­stone before they are able to per-fuse through the nylon mesh of the refillable tea bag into the Elixir.

Once they are wetted and in1 solution these microbes will begin to grow and multiply, doubling their total population once every 25 minutes.

In 36 hours they will have doubled in their population 72 times reaching a certain number; which is unknown and referred to as reaching a “quorum”. At this point they send and receive signals between each other, literally having “conversations” with each other. This is referred to as “quorum sensing”).

At some point in the conversation between these billions of microbes, they “swarm”, moving closer to each other; with their flagella aligning and moving in synchrony with each other until they have used up the nutrients available to them in the Elixir Maker. At which point they begin to differentiate, dropping their motors (flagella), and produce an exo­polysaccharide matrix and form biofilms on the walls of the Maker, in the current of elixir and bubbles, chaining cells together, in layers, forming large multicellular colonies, the two bacillus species becoming endospores, and the pseudomonas becoming inactive until food is made available; and where their conversations between one another continue in­-mass.

Below see the biofilms formed inside my Elixir maker after 4 weeks of adding a 1⁄4 teaspoon of powder every two days. They expect food to be made available and this is what they do inside your gut. 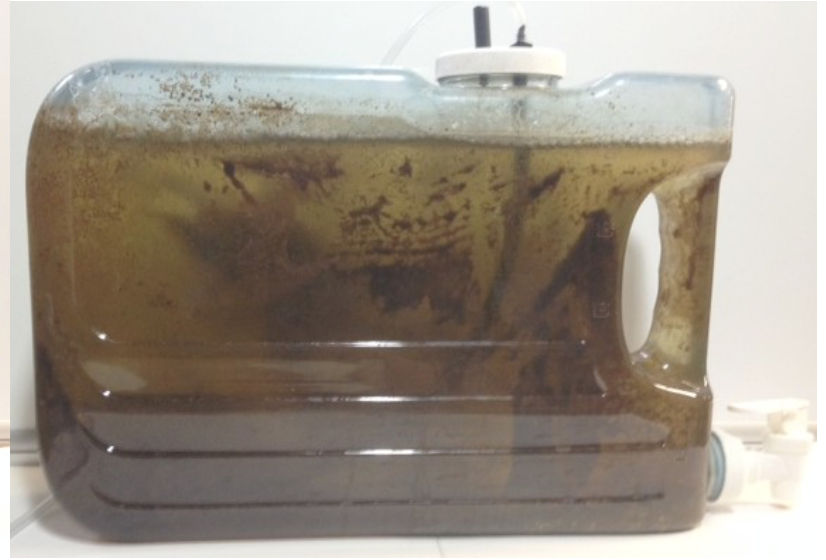 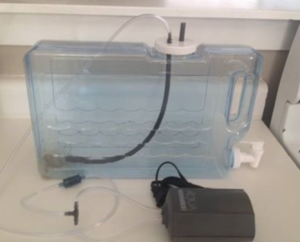 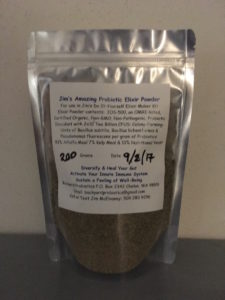 The Elixir Powder is a granulated matrix of certified organic non­GMO, non­-pathogenic microbes, spent mushroom compost and kelp meal named IOS­500, plus alfalfa meal, and nutritional yeast IOS­500TM is produced by, Bio-remediation International, Inc. It is Certified Organic and approved for use as of April 22, 2015, without restriction, in organic crop production and in organic food processing by the Organic Materials Research Institute (OMRI), in Corvallis, Oregon, for the USDA’s National Organic Program (NOP). 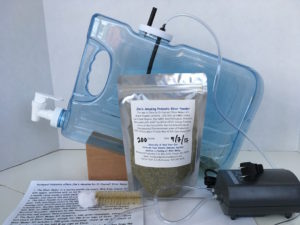